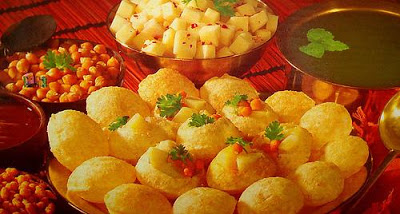 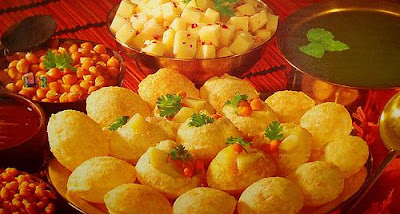 Pani puri is a very famous Indian and Pakistani food availabe at various food streets. It is very spicy food and the exciting part about pani puri is the way it is eaten. It is eaten in a typical fashion which makes it look even more interesting and tasty. To eat pani puri, make a small hole in the center of the puri and put few pieces of boiled chick pea and potato then pour 2-3 tbspn of sour liquid mixture in it and eat it in one whole bite. This is very interesting way of eating food with little bit of enjoyment.!

Procedure:
1. In a deep bowl, mix semolina, flour and salt. Add water gradually to knead the dough, don’t put much water at once because we want to make the dough slightly hard as compare to normal dough. You will have to knead it properly so that it would not become too much hard. Leave the dough for 30 mins. [ Tip : set 30 mins time on your digital timer so that you get notified immediately]
2. After that make very small pieces of dough like small lemon size and roll it to make circular shape flat bread but it would be very very much thin like paper. Otherwise it will not remain crispy after frying. After rolling each piece of dough pu it in a tray and cover with moisted muslin cloth (this is very important).
3. Now deep fry all the rolled pieces one by one. You have to fry in such a way that after dipping in pre heated oil, slightly press the bread using your strainer or spatula and when the bread comes on the surface turn it and take out from the oil just after getting it golden color. Make sure the flame should remain high while frying.
4. Now to make Sour liquid mixture, in a deep pan, add tamarind paste, black salt, water, sugar and green paste (make paste of green chilies and coriander using hand blender).
5. Boil this mixture and add more flavors according to your taste like crushed red pepper etc.
6. Serve the pani puri in a main serving plate, with boiled potatoes and boiled chick pea and put a small bowl of sour liquid mixture on the plate which looks very attractive and traditional.

How to Eat Pani Puri:
It is not necessary that pani puri is served with only chick pea and potatoes. It is served in various styles with many other sauces too. Here is a video which demostrates how pani puri should be eaten the right way.. 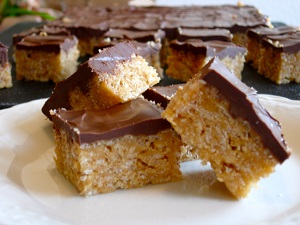 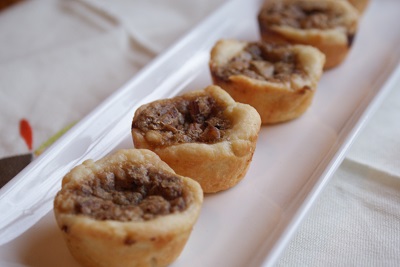